BY Ghost Lifestyle
view reviews
Notify Me When Back In Stock
You have successfully subscribed to this product
$74.95 - $0.05
Availability : IN STOCK

Ghost Burn V2 is Ghost Lifestyles flagship fat burner reimagined, containing key fat burning amino acids and a solid dose of stims in every serve. This thermogenic is formulated with high quality patented ingredients including Carnipure, a pure carnitine blend and CaloriBurn a powerful Grains of Paradise Seed Extract. Like all Ghost products, there's no hiding behind prop blends with this awesome full disclosure label. Formulations and flavour you can trust are a guarantee from our friends at Ghost Lifestyles.

Ghost Burn V2 is a high quality, clinically dosed thermogenic fat burner from the makers of best-selling pre-workout "LEGEND". Ghost Burn V2 may well become your new favourite thermo, containing 5 standardized patented ingredients, there has been no expense spared with this formulation. Packed full of fat-burning stimulants, thermogenic ingredients and fat burning amino acids this formula is sure to turn up the heat.

L-Carnitine: If you've been following us for a while, you will know that carnitine is one of our favourite fat-burning amino acids. Ghost Burn V2 contains contains not 1 but three forms of Carnitine with the patented ingredient Carnipure. 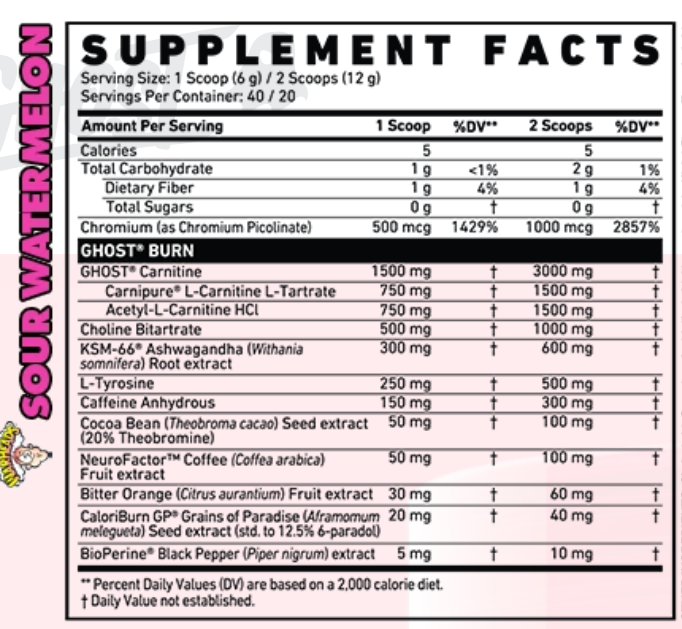